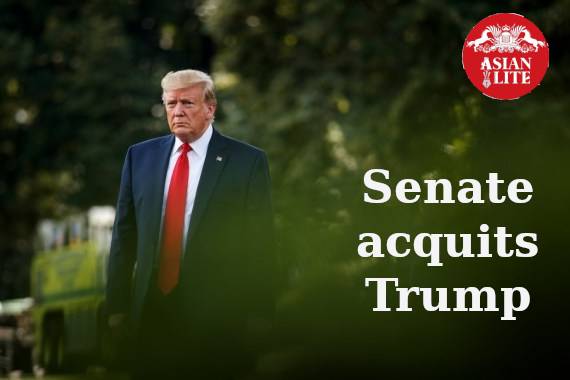 After a week of the impeachment trial, only 57 Senators, including seven Republicans voted to convict him, short of the 67 needed for the two-thirds majority to convict him….reports Arul Louis

The Senate on Sunday acquitted former President Donald Trump for a second time blocking the Democrat’s attempt to punish him for the storming of the Capitol by his supporters.

After a week of the impeachment trial, only 57 Senators, including seven Republicans voted to convict him, short of the 67 needed for the two-thirds majority to convict him.

Trump was impeached by the House of Representatives in January on the charge that he incited an insurrection when his supporters attacked the Capitol on January 6 leaving five people, including at least two police officers dead.

The Republican leader of the Senate of the Senate, Chuck Schumer, said after the acquittal that it was “a vote of infamy in the history of the United States”.

A section of Trump’s supporters from a rally addressed by Trump went to the Capitol and overwhelmed security while Congress was tallying the electoral college votes electing Joe Biden as president.

The House accused him of inciting the riot in which his supporters entered the Senate chamber and offices of officials like Speaker Nancy Pelosi. Former Vice President Mike Pence, who was presiding over the Senate session and others managed to barely to be evacuated.

The videos made for an emotional case against Trump by showing the imminent danger members of Congress were in but it could only persuade only seven Republicans to defect.

Trump’s defence was mainly centered on the constitutional right to free speech, which they said Trump exercised by questioning the results of the election and urging supporters to protest.

Trump was tried by Senate last year on charges of abuse of power and obstruction of Congress made in a House impeachment but was acquitted.