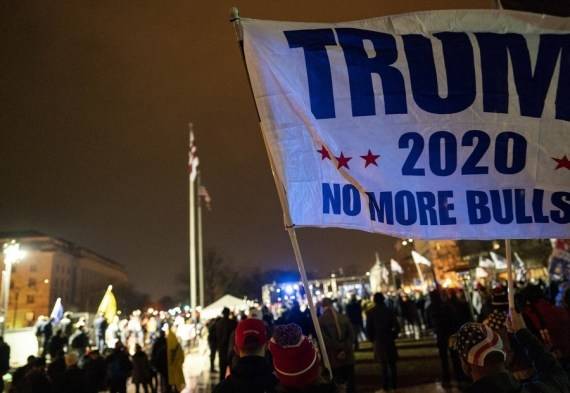 At least four people were killed and 42 others arrested in the wake of the violent protests that took place inside the US Capitol in Washington D.C.

Addressing the media here on Wednesday night, Metropolitan Police Department Chief Robert Contee confirmed that a woman was shot and killed, while the three others died after apparently suffering “separate medical emergencies” near the Capitol grounds, Xinhua news agency reported.

There were no other details on the victims.

Contee however, added that the woman was transported to an area hospital where she was pronounced dead.

The police has made a total of 52 arrests, including four for carrying pistols without a license and one for possession of a prohibited weapon, The Hill news website quoted the police chief as saying.

Twenty-six of the 52 arrests were made on Capitol grounds, he added.

He also confirmed that 14 officers were injured, with one “pulled into the crowd and assaulted”, resulting in “serious injuries”.

According to Contee, two officers were hospitalised currently.

Also speaking at the briefing alongside Contee, Washington D.C. Mayor Muriel Bowser extended an emergency declaration in the city until January 21, and imposed a curfew until 6 a.m., on Thursday morning.

Earlier Wednesday, thousands of supporters of President Donald Trump stormed the Capitol, forcing emergency evacuation at both the Senate and the House of Representatives.

The chaos unfolded as the Chambers were preparing to certify President-elect Joe Biden’s Electoral College win.

Former President George W Bush, a Republican, slammed the mob action as an “insurrection”, as did other Republicans such as Senate majority leader Mitch McConnell and Senator Mitt Romney, also a 2012 presidential nominee.

Calls went up shortly for Trump to be impeached, even if there were just two more weeks left of his term, or be removed from office under the 25th Amendment of US constitution, which empowers the federal cabinet to sideline the president finding him unfit to govern.

Leading legal experts such as Lawrence Tribe, a Harvard law professor, told CNN that Trump had “engaged in inciting sedition.”

Barack Obama also blamed Republicans and Trump, “who has continued to baselessly lie about the outcome of a lawful election,” he said in a statement.

Trump’s most recent predecessor called the incident “a moment of great dishonor and shame for our nation.”

“But we’d be kidding ourselves if we treated it as a total surprise,” Obama said, calling the events of the day “the consequences” of Trump and his supporters refusing to accept the results of last year’s election.

Bill Clinton denounced the riot as “unprecedented assault” on the US Capitol and the nation itself.

“Today we faced an unprecedented assault on our Capitol, our Constitution, and our country,” the Democratic former president said in a statement.

“The match was lit by Donald Trump and his most ardent enablers, including many in Congress, to overturn the results of an election he lost.”