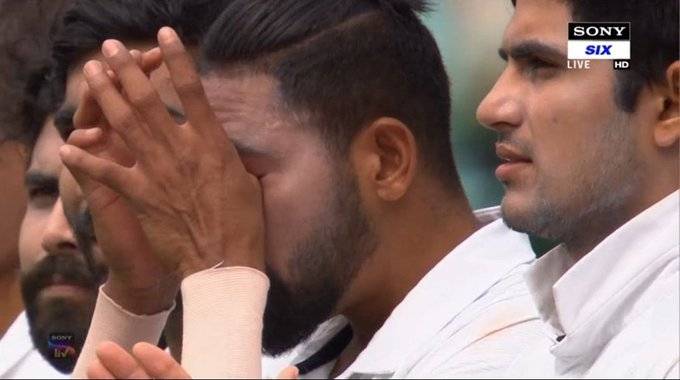 Mohammed Siraj, who is playing his debut series, broke down on Thursday while the national anthem was being played just before the third Test against Australia as memories of his father…reports Asian Lite News

The Covid-19 pandemic has left young cricketers playing their debut series emotionally affected as they are often missing their relatives and family in times of joy and sorrow.

Mohammed Siraj, who is playing his debut series, broke down on Thursday while the national anthem was being played just before the third Test against Australia as memories of his father, who died a couple of months ago, came flooded back to him. He had not seen his dad for close to three months before he died and hasn’t seen his family for over one-and-a-half months since his death.

Hours after Siraj broke down, Australia opening batsman Will Pucovski struggled to control his emotions in the media interaction when he said that he is missing mum, dad and girlfriend who couldn’t come to Sydney to watch him make his debut due to the Covid-19 restrictions.

Pucovski belongs to Malvern, which is in the state of Victoria, about 900 km from Sydney in New South Wales.

Sydney has recently witnessed a surge in Covid-19 cases and the cricket teams are in strict quarantine. According to the Australian team tradition, the family and partner of the debutant are present alongside the player when he is presented with the baggy green cap prior to the debut at home.

“Obviously, I would have loved Mum, dad and girlfriend to be up here and my mates. They couldn’t make it due to Covid-19 restrictions, especially dad, who has been a massive support,” said Pucovski during the media interaction.

The 22-year-old Pucovski was presented the cap by Australia’s assistant coach Andrew McDonald, who has also seen him grow as a player for Victoria where the former Aussie international was a coach.

Siraj, on the other hand, has not seen his family for over four months now as he was initially in the UAE for the Indian Premier League and then flew straight down to Australia for the ongoing international series.

In the interim, he lost his father – on November 20 – about a week after the Indian team landed in Australia and were in quarantine ahead of the limited overs series.

The pace bowler, who was part of the squad for the Tests that were to begin only on December 17, was given the option of returning home to attend the burial of his father but decided to stay back as the entire process of going back and returning would have involved quarantine periods.

“During the national anthem, I just remembered my father. That is why I felt a bit emotional. Dad always wanted to see me play Test cricket. If he would have been alive, he would have seen me,” Siraj told the media after the end of first day’s play.

4
Previous Nepal bans importing Indian poultry items
Next How did the mob waltz into Capitol?