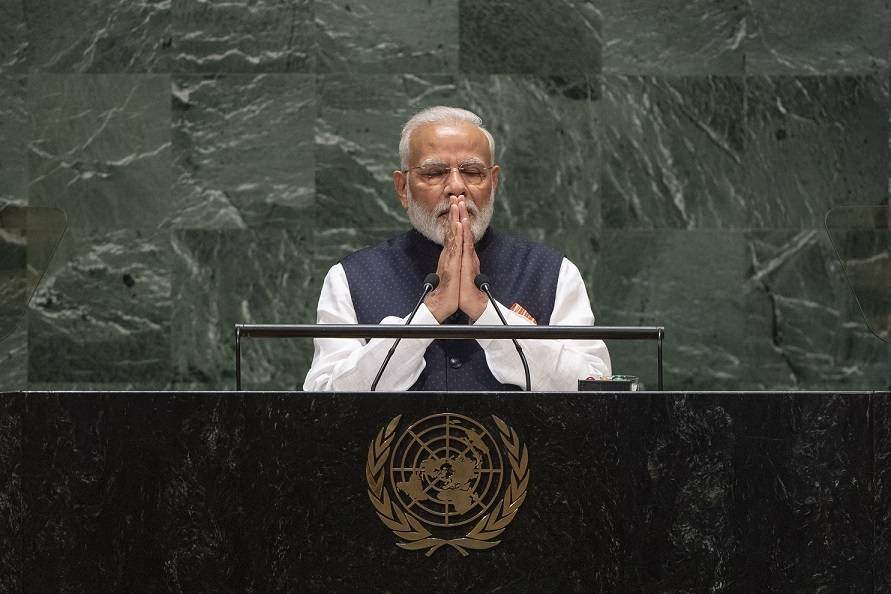 India became a non-permanent member of the Security Council on Friday taking a seat at the UN’s highest decision-making body at a time of changing reality even as it presses ahead with its quest for a permanent seat.

As a member, India will be able to push its agenda of promoting the ethos of “Vasudhaiva Kutumbakam” — the world is one family — while being the leading voice on combating terrorism, and also confronting China’s attempts to bring up Kashmir.

During the crucial phase of the world emerging from the trauma and chaos of the COVID-19 pandemic to face change realities, New Delhi can help shape the new order.

With T.S. Tirumurti as the permanent representative, India will formally take its seat on Monday morning when the Council meets for its first meeting of the year in a closed session presided over by Tunisia’s Permanent Representative Tarek Ladeb, the president for the month of January.

India’s flag will go up in front of the Council chamber at a televised ceremony at noon local time (10.30 p.m. in India) proclaiming its membership.

India was elected for the eighth time to the Council polling 184 votes of the 192 votes cast for the non-permanent seat to represent Asia.

Indonesia retired at the end of 2020, leaving India to succeed it on the Council. Vietnam is the other Asian country holding a non-permanent seat on the 15-member Council.

As historically the biggest contributor of troops to UN peace-keeping, India will have an input into determining how the operations are mandated. India has complained that the process driven by the permanent members does not adequately consult with the troop-contributors or take their experiences into account.

India has warned about the Council’s mission-creep a” taking on issues like climate change for which it does not have a mandate under the UN Charter. Now, India can voice its reservations in the Council.

During the past two years, China has tried to bring up the Kashmir issue in the Council as a favour to its client Pakistan. Because of the opposition of the other members, Beijing has not been able to hold an open session and has had to settle for informal consultations without any statement or record.

If Beijing tries again to bring up Kashmir, India will be able to directly deal with the attempts and should informal sessions be held, it can answer right there.

Being on the Council will mean taking positions and setting out its stand almost daily on global issues, sometimes in real-time.

The Indian mission has been reinforced with at least four more diplomats to take care of the increased workload.

The hot spots confronting the Council right now are Yemen, Syria, North Korea, Ethiopia, Iran, Myanmar, Afghanistan and the Central African Republic. When it was out of the Council, India did not have to take a stand, for example, on issues like the Ethiopian crisis or expound it to the world, but it will now have to react.

There are also confrontations involving permanent members a” Russia with Ukraine, and China with India and several Indo-Pacific countries.

At the Council, India will find its emerging foreign policy outlook of assertive independence with primacy to its perceived interests tested as its diplomacy is stretched while balancing its strategic interests amid competing pulls.

For instance in Yemen, where there has been a fresh round of violence this week, India will have to deal with the seepage of Middle Eastern rivalries into the conflict with Saudi Arabia as a key player of interest to India.

In Syria, there is the line up of Russia versus the western nations and that is the case also with Moscow’s dispute with Kyiv.

The degree of polarisation at the Council is likely to lessen on one front with the change in the United States presidency and India will not face the same degree on pressures on issues like Iran and Venezuela.

The distinctive division in the Council is between the western countries and Russia, with China being on the side of Russia most of the time, although often not as assertively.

While India has drifted closer to Western European positions on some issues like Israel, on others like Syria, it is closer to Russia’s.

And on the Rohingya refugee crisis, New Delhi’s stance is closer to Beijing’s, rather than the West’s.

India first served on the Council in 1950 and 16 years elapsed before its next turn in 1967. Since then, it has been been on the Council six more times with increasing frequency, the last one in 2011.