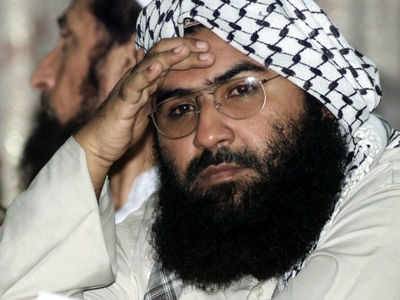 Earlier, a Pakistani anti-terrorism court has sentenced Hafiz Saeed, the leader of the banned Jamaat-ud-Dawa (JuD) who mastermind of the 26/11 Mumbai terror attack, to more than 15 years in prison after he was convicted in another case…reports Asian Lite News

A Pakistan anti-terrorism court on Thursday issued an arrest warrant for banned jihadist outfit Jaish-e-Mohammad (JeM) chief Masood Azhar on the charges of terror financing, according to media reports.

The Anti-Terrorism Court (ATC) Gujranwala issued the warrant during a hearing in a terror financing case instituted by the Counter Terrorism Department (CTD) of Punjab police against some members of the JeM, the Indian Express reported.

According to reports, Azhar is believed to be hiding in a “safe place” in his native town Bahawalpur.

Earlier, a Pakistani anti-terrorism court has sentenced Hafiz Saeed, the leader of the banned Jamaat-ud-Dawa (JuD) who mastermind of the 26/11 Mumbai terror attack, to more than 15 years in prison after he was convicted in another case.

Verdicts of three cases against Saeed, who been behind bars since last year, have already been pronounced, whereas several others against JuD leaders are pending with the ATCs, according to The Express Tribune report.

This was after Saeed and three others were convicted by an ATC on November 19 in two separate terror-financing cases.

In the November verdict, the court also forfeited property possessed by Saeed, besides imposing a fine of 110,000 PKR.

In September, the Interior Ministry had informed the Senate that the federal government had frozen a total of 964 properties belonging to the JuD and Jaish-e-Mohammad (JeM).

On February 12, Saeed was convicted in the two cases and sent to jail for five-and-a-half years.

Pakistan filed charges against him only after Financial Action Task Force (FATF), a global watchdog for terror funding and money laundering put the country under ‘grey list’.

In November, Pakistan’s fresh offensive to sabotage the valley’s first major democratic exercise was exposed through the killing of four heavily-armed terrorists of Jaish-e-Mohammad in an encounter by the Jammu and Kashmir Police and the Central Reserve Police Force (CRPF), at the Ban Toll Plaza near Nagrota.

The incident has taken place just a few days ahead of the District Development Councils (DDCs) elections in Jammu and Kashmir.

Director General of the J&K Police Dilbag Singh has observed that the group of the JeM terrorists, wiped out on the Jammu-Srinagar highway on Thursday, had been given the task of disrupting the DDC elections.

Masood Azhar’s three nephews, each carrying a US-made M4 sniper, have been killed in three different encounters in Kashmir in the last three years.

A number of US-made M4 sniper rifles, used by Nato forces to fight terrorism in the Afghanistan-Pakistan region, have fallen in the hands of Azhar’s guerrilla group, JEM, in Jammu and Kashmir (J&K). Released by India in exchange for the IC-814 hostages at Kandahar in December 1999, Azhar has been designated as an international terrorist by the UNSC in May 2019, after years of sustained resistance by China.

India in UN against terrorism

India’s Permanent Representative T.S. Tirumurti said that New Delhi will be the voice against terrorism at the UN Security Council, but will also act a healer and a bridge-builder within the polarised body.

Tirumurti said that India will be raising our voice against the enemies of humanity, particularly terrorism.”

On the terrorism front, India will be able as a Council member to participate in the discussions about terrorism and terrorists, where China has given Pakistan cover in the past.

For example, Beijing for several years protected Masood Azhar, the Pakistan-based terrorist leader of the Jaish-e-Mohammed, who was behind several terrorist attacks – the most recent one in Pulwama in 2019 that killed 40 Indian security personnel.

The Council is scheduled to take up international terrorism on January 12.

Tunisia’s Permanent Representative Tarek Ladeb, who is the Council President for this month said at a news conference on Monday evening that because of the grave threat from terrorism, he was organising the session as “a signature event”.

“We believe that this challenge cannot be addressed individually. It can only be addressed only within the framework of the strong international cooperation and coordination and, of course, within the implementation of all the relevant Security Council resolutions,” he said.