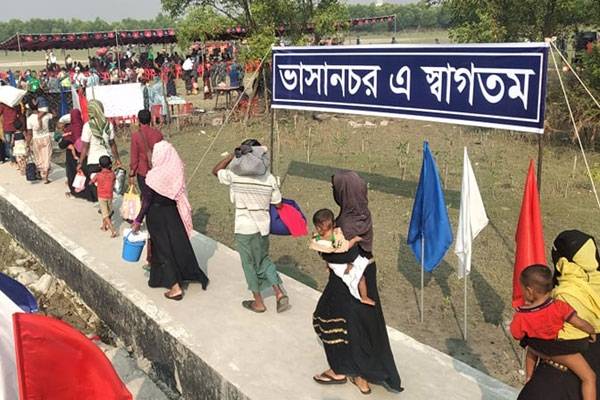 On December 31, 2020, the UNGA plenary adopted the resolution by a recorded vote of 130 in favour to nine against, with 25 abstentions…reports Sumi Khan

Bangladesh Foreign Minister Foreign Minister AK Abdul Momen said that the countries, including Russia and China, which voted against a resolution recently adopted by the 75th UN General Assembly (UNGA) on the human rights situation of the Rohingya refugees, “could play a better role”.

On December 31, 2020, the UNGA plenary adopted the resolution by a recorded vote of 130 in favour to nine against, with 25 abstentions.

Besides China and Russia, the other countries that voted against the resolution are Belarus, Cambodia, Laos, Myanmar, the Philippines, Vietnam and Zimbabwe.

“Those countries could play a better role which voted against the resolution. We don’t have any displeasure against them,” Momen told reporters at his office on Sunday.

“It’s a strategic decision. We’re happy with the results,” he added.

“We’re happy that they talked to us before the decision,” the Foreign Minister said explaining why the countries wanted to remain neutral in the UN to use their leverage on Myanmar in finding a solution to the Rohingya crisis.

China is trying to work with Myanmar and Bangladesh to find a solution through tripartite discussions.

Momen said the Rohingya issue remains a big challenge and expressed his optimism over resumption of the repatriation process in this year, adding: “It’s our expectation.”

The Foreign Minister said he wrote to his counterpart at the Ministry of Foreign Affairs, Myanmar on January 1 touching upon overall issues.

“I’ve conveyed to my counterpart in Myanmar that we want the process to start. You repeatedly told us that you will take them back after verification and provide safety and security. It’s our demand that you will provide it what you promised,” he said, adding that creating a conducive environment for voluntary repatriation has to be in place as promised.

He said Myanmar is a friendly country and Bangladesh is trying to solve the Rohingya issue through discussion with the former bilaterally, apart from exploring other ways.

Responding to a question, the Foreign Minister said China is trying to discuss the issue through a trilateral mechanism with Myanmar and Bangladesh.

“We’re ready. We’ll sit once a date is fixed for the next round of discussions.”

He said Bangladesh also requested Japan as they have leverage on Myanmar.

“Japan assured us of extending their help. We’re yet to take a decision on how the framework will be designed.”

Bangladesh thinks the Rohingya will “jeopardise regional and international security” if the 1.1 million refugees were left unattended and not given an opportunity to return to their homeland.

“Development is not possible without peace,” he said.

Two repatriation attempts turned futile as Myanmar “failed to remove trust deficit” among the Rohingya and there was “lack of conducive environment” in Rakhine state for their return.

Bangladesh and Myanmar signed the repatriation deal on November 23, 2017.

On January 16, 2018, the two countries signed a document on “Physical Arrangement”, which was supposed to facilitate the return of the Rohingya to their homeland.

More than three years ago, the Myanmar army “targeted, killed, and raped” the Rohingya and burned their villages, with the UN saying it was an “ethnic genocide”.

Over 800,000 Rohingya fled the “genocidal violence” and Bangladesh is now hosting over 1.1 million refuees.

Bangladesh is trying in multiple ways, bilaterally, multilaterally, trilateral and through the judicial system, to find a lasting solution to the Rohingya crisis.

It has proposed deployment of non-military civilian observers from Myanmar’s allies, including Japan, China, Russia, India and the ASEAN member states.

Myanmar however, is yet to respond to the proposal.

Meanwhile, the problem of Rohingya Muslim refugees is a big one and unless they return to Myanmar, the problem will remain for India and other countries, Border Guard Bangladesh (BGB) Director General Maj Gen Shafeenul Islam said here on Friday after the five-day meeting with his Border Security Force (BSF) counterpart Rakesh Asthana.

Islam said that Rohingya Muslims are not only found in India, they are found across the world including countries like Thailand, Indonesia and Malaysia.

“The Rohingya Muslim refugee problem would be solved when they would go back to their country, Myanmar, at the earliest otherwise the problem would remain for India and other countries,” the BGB DG said.

He said: “We are regularly nabbing the Rohingyas at the border, escaping from the Cox’s Bazar camps. There are Rohingya settlements as well. They also have UNHCR cards. They always try to get inside… To meet their relatives in the Bangladesh camps.”

Asthana said that Rohingya Muslims are being occasionally caught in different parts of the country by the state security forces.

“Both BSF and BGB are committed to stop their infiltration and exfiltration and we are taking action not only against the Rohingyas, but also against all illegal trespassers,” the BSF head said.

A senior BSF officer said that in the all important five-day Border Coordination Conference (BCC), BSF chief Asthana led the 12-member delegation while the 11-member BGB team was headed by Islam. The DG level meeting or the BCC between the BSF and BGB was held first time outside the national capital.

Rohingyas from refugee camps in southeastern Bangladesh often enter into the northeastern states of India illegally in search of jobs or get trapped in human trafficking.

According to the security officials, at least 35 Rohingya Muslims from Myanmar, including women and children, have been detained in the past one month for illegally entering into northeast India.

Over 7,38,000 Rohingyas from Rakhine in western Myanmar have taken shelter in the camps in Cox’s Bazar since the beginning of the ethinic troubles on August 25, 2017, following a wave of violence and persecution, which has been described by the United Nations as attempted ethnic cleansing.