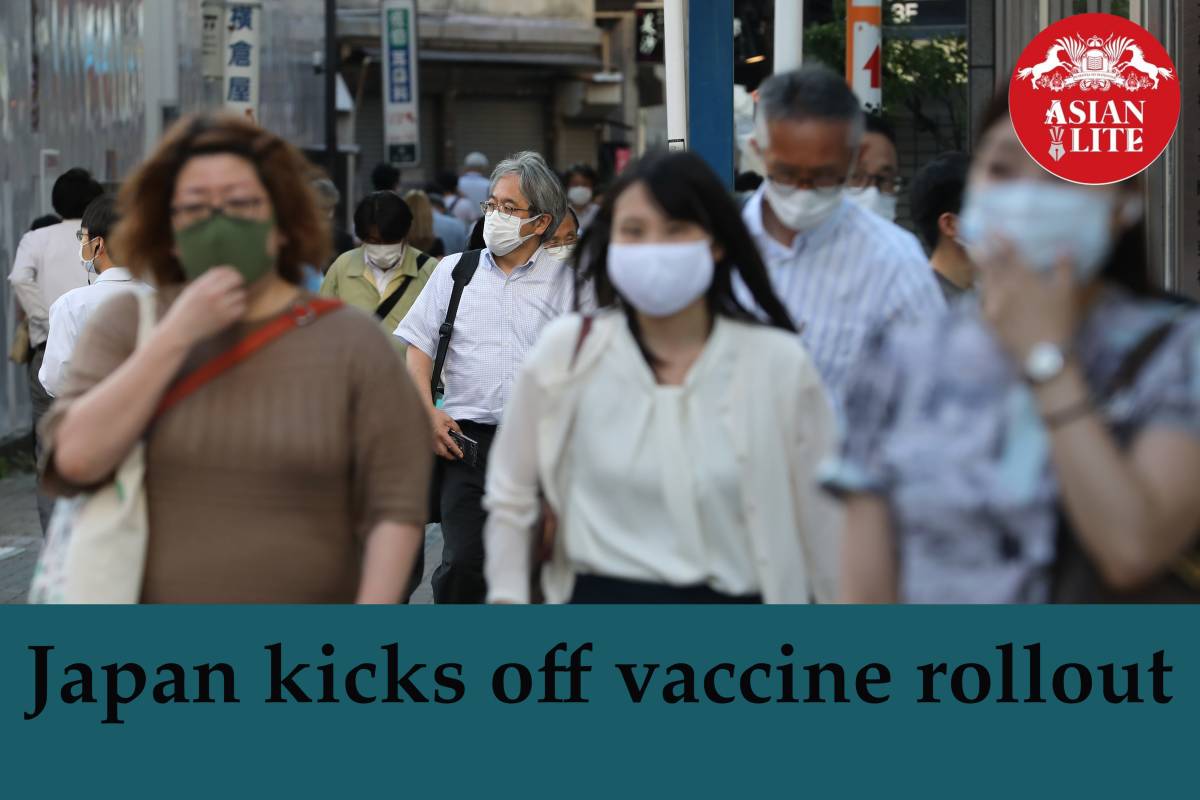 Around 40,000 medical workers will receive the first jabs, double the number initially planned, with 12 of around 800 workers at the medical centre in the capital first to be vaccinated on Wednesday and reporting no immediate side effects…reports Asian Lite News

Japan on Wednesday began its Covid-19 vaccination drive in which frontline workers will be among the first to get Covid -19 vaccines.

Officials said that the first inoculations will use the vaccine developed by the US pharmaceutical firm Pfizer and the German partner BioNTech taking place at the National Hospital Organisation Tokyo Medical Centre.

Around 40,000 medical workers will receive the first jabs, double the number initially planned, with 12 of around 800 workers at the medical centre in the capital first to be vaccinated on Wednesday and reporting no immediate side effects, Xinhua reported.

Of the 40,000 medical workers at 100 facilities nationwide, 20,000 doctors and nurses will be asked to maintain records on a daily basis for seven weeks after taking the first of two shots which will be administered three weeks apart.

The survey is in a bid to determine if there are any adverse effects from the jabs and other related information.

Head of the National Hospital Organization Tokyo Medical Center Kazuhiro Araki said he hopes those participating in the study will “help both staff and patients prevent infections.”

Araki himself was the first person to receive the vaccine.

Prime Minister Yoshihide Suga, meanwhile, told a parliamentary committee meeting that the vaccines were essential in the nation’s bid to tackle the novel coronavirus pandemic.

“The vaccines will be the decisive factor in fighting the coronavirus,” Suga said, adding that he would continue to push forward with the rollout while keeping the public informed.

Following the initial round of medical workers being inoculated, in March, around 3.7 million health workers will also begin receiving the vaccine, followed by 36 million people aged 65 or older from April.

A second shipment of the Pfizer vaccine is scheduled to arrive from Europe next week, Japan’s minister in charge of vaccination efforts Taro Kono said the previous day, to ensure there are enough doses to vaccinate the elderly in Japan’s rapidly aging society.

Following the elderly, those with preexisting conditions and those working at elderly care facilities will be next in line to be vaccinated, followed by the rest of the population.

A batch of around 400,000 doses of the Pfizer-BioNTech vaccine arrived last Friday at Narita airport near Tokyo from Brussels, with a health ministry panel green-lighting the use of the vaccine amid the ongoing pandemic here, which is weighing heavily on the country’s medical system.

Japan’s Ministry of Health, Labour and Welfare, thereafter, fast-tracked and formally approved the country’s first vaccine on Sunday for people aged 16 or older.

“I hope many people will take the vaccine with an understanding of the benefits and risks,” Kono said.