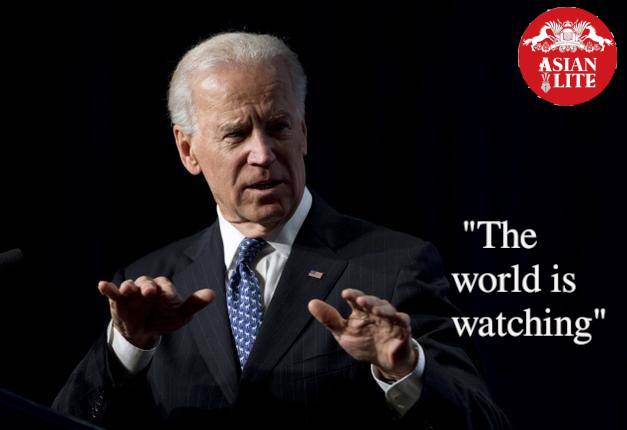 At a White House briefing on Wednesday, the President said the administration “will identify a first round of targets this week” and “we’re also going to impose strong export controls”…reports Asian Lite News

US President Joe Biden announced that he has approved a new executive order to immediately sanction leaders of the Myanmar military who directed the February 1 coup, as well as their business interests and family members.

At a White House briefing on Wednesday, the President said the administration “will identify a first round of targets this week” and “we’re also going to impose strong export controls”.

Biden also confirmed the freezing of US assets that “benefit the Burmese (Myanmar) government, while maintaining our support for healthcare, civil society groups, and other areas that benefit the people directly”.

The Myanmar military took over the country on February 1 over the disputed results of the November 8, 2020, parliamentary elections.

Besides the coup, the military also declared a year-long state of emergency and handed over the state power to Commander-in-Chief of Defence Services Sen-Gen Min Aung Hlaing.

Regarding Suu Kyi’s detention, Biden demanded the immediate release of all “democratic political leaders and activists”.

“The military must relinquish the power it seized and demonstrate respect for the will of the people of Burma as expressed in their November 8 election,” he said.

Biden said the people in Myanmar are making their voices heard by staging the ongoing protests across the country the coup and the detentions, adding that “the world is watching”.

“Violence against those asserting their democratic rights is unacceptable, and we’re going to keep calling it out.”

The President concluded his address by saying that “we’ll be ready to impose additional measures, and we’ll continue to work with our international partners to urge other nations to join us in these efforts”.

In the November 8, 2020, elections, the former de facto leader’s NLD party obtained more than 80 per cent of the seats and increased its parliamentary majority.

The military or the Tatmadaw had called for an investigation into voting lists, alleging fraud and discrepancies.

But the Union Election Commission rejected the allegations of election fraud on January 29.