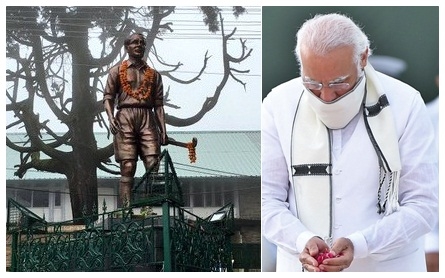 Prime Minister Narendra Modi on Saturday paid rich tribute to the legendary sportsperson, Major Dhyan Chand, on the occasion of his 115th birth anniversary and said that his magic with the hockey stick can never be forgotten.

Modi took to Twitter to remind that Dhyan Chand’s birthday, which is also celebrated as the National Sports Day when remarkable achievements of all those exemplary sportspersons who have represented India in various sports and made the nation proud is commemorated. “Their tenacity and determination are outstanding.”

“Today, on National Sports Day, we pay tributes to Major Dhyan Chand, whose magic with the hockey stick can never be forgotten. This is also a day to laud the outstanding support given by the families, coaches and support staff towards the success of our talented athletes.”

The Prime Minister stated that the union government is making numerous efforts to popularise sports and support sporting talent in the country. “At the same time, I urge everyone to make sports and fitness exercise a part of their daily routine. There are many benefits of doing so. May everyone be happy and healthy!”

Union Sports Minister Kiren Rijiju also tribute to the hockey legend. He tweeted a video saying, “Today is National Sports Day and I pay my tribute to the ‘The Wizard of Indian Hockey’ Major Dhyan Chand on his Birth Anniversary. The great sportsman displayed unparalleled dedication and skills in Hockey to bring accolades and honour to India”.

On National Sports Day, the government honours outstanding sportspersons by conferring them with the Rajiv Gandhi Khel Ratna Award, Arjun Award and Dronacharya Award (for best coach) at the Rashtrapati Bhawan. However, this year, the ceremony will take place virtually due to the Covid-19 pandemic.

A total of 74 sportspersons and coaches have been chosen for this year’s national sports awards that include cricketer Rohit Sharma, Indian hockey captain Rani Rampal and TT player Manika Batra.