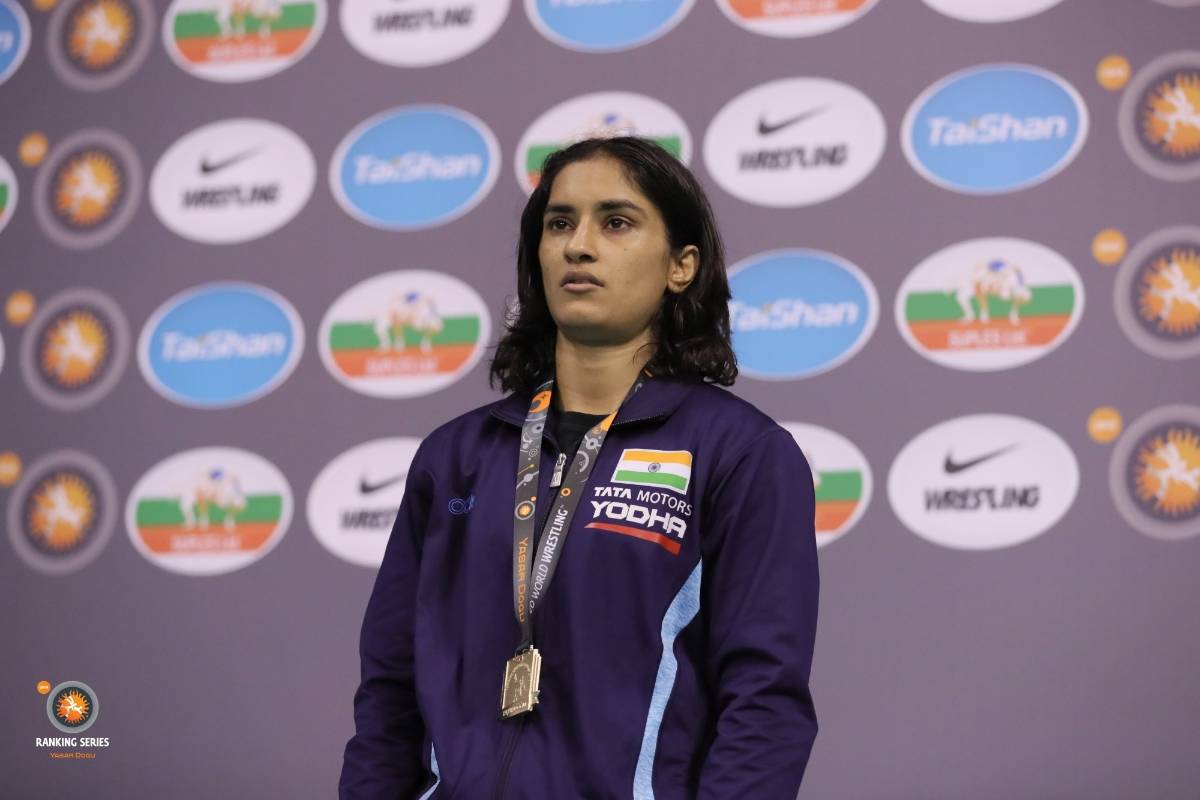 Asian Games gold medal-winning woman wrestler Vinesh Phogat has tested positive for the dreaded coronavirus. She was tested by the Indian government as per the protocol as she was to receive Rajiv Gandhi Khel Ratna, the country’s top sports accolade, here on Saturday.

“My test was done on Thursday and it has come positive. I am at home right. Now, my family members will also get tested tomorrow. I still didn’t feel any symptoms. I am absolutely fine,” Vinesh told IANS.

Earlier, Vinesh had pulled out of the national wrestling camp, scheduled to begin on September 1 in Lucknow. The Wrestling Federation of India later postponed the women’s camp.

Woman wrestler Vinesh Phogat, who has been chosen for the prestigious Rajiv Gandhi Khel Ratna but has tested positive for coronavirus, is among the 14 sportspersons who will be absent at a virtual presentation of the annual National Sports Awards by the President of India Ram Nath Kovind on Saturday morning.

A total of 74 sportspersons and coaches have been chosen for the awards. Among the absentees are two of the five Rajiv Gandhi Khel Ratna award winners. Besides Vinesh, the other absentee is cricketer Rohit Sharma, who is with the Mumbai Indians team in the UAE for the IPL.

“My test was done on Thursday and it has come positive. I am at home right. Now, my family members will also get tested tomorrow. I still didn’t feel any symptoms. I am absolutely fine,” Vinesh told IANS on Friday evening.

The Sports Ministry had initially stated that nine awardees won’t be attending the ceremony. But late on Friday, it informed that the number has gone up to 14. The final list was released by the ministry after Vinesh tested positive for COVID-19.

The annual ceremony, which is staged at the Rashtrapati Bhavan on hockey Wizard Dhyan Chand’s birth anniversary on August 29, traditionally attracts a lot of eyeballs.

A who’s who of Indian sports fraternity and top politicians gather under one roof on this occasion.

However, the ongoing COVID-19 pandemic has forced extensive measures and the event will take place virtually this time.

The change in the traditional ceremony has taken the glamour away from the ceremony. At least that’s what some of the award recipients feel as they went through the dress rehearsal ceremony on Friday.

“Yeah, we will miss the ceremony. Getting an award personally is something different. You can take your family along, click some photos at Rashtrapati Bhavan. Virtual is not such fun,” said an athlete, who will receive the Arjuna Award.

Another awardee said the pandemic has ‘killed’ the excitement. “Personally, I am not liking it. I will get the award but that newspaper front page photos with the President, I will miss it,” joked one athlete.

Rajiv Gandhi Khel Ratna winner Manika Batra said: “I feel bad about the covid situation and the threat it brings to life all over. Meeting the Hon’ble President is surely someone we athletes dream about the meeting,” she said.

“But in the current situation I would say being young and hopeful, let’s do something more in some tournaments that we all get a chance again to meet him.”

Arjuna awardee Divya Kakran said: “I know it will be held virtually and not in Rashtrapati Bhavan. But that is for everybody’s safety. The ceremony will start at 10.45 am. So we have to reach in advance and get familiar with all the protocols.”

Boxer Manish Kaushik will connect from Pune. “My rehab is on and I will attend the ceremony from here only. This award will motivate me to do well in future events,” he said.

The sports ministry had earlier announced Rani Rampal, Vinesh, Manika Batra, Rohit Sharma and Mariyappan Thangavelu as five Rajiv Gandhi Khel Ratna winners and 27 for the Arjuna Award, the highest ever in the history of the national sports awards.