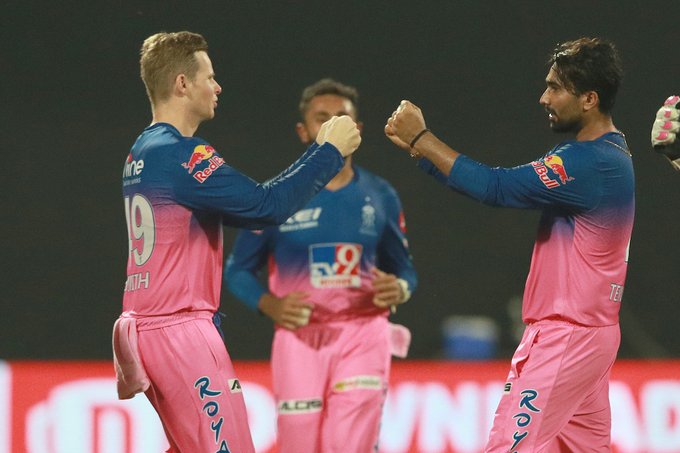 Rajasthan Royals back in the race with easy win over CSK

Former champions Rajasthan Royals (RR) gave themselves a new lease of life on Monday with a convincing seven-wicket win over three-time winners Chennai Super Kings (CSK), a result that lifted them from the bottom of the Indian Premier League (IPL) points table to the fifth spot.

Before the game started on Monday, RR was lying at the bottom of the eight-team points table. After they won with 2.3 overs to spare, thanks to Jos Buttler’s 48-ball 70 not out, they climbed to the fifth spot with eight points from 10 matches. Steve Smith’s team is very much in the race to qualify for the playoffs.

The top four teams qualify for the playoffs after each team has played 14 matches each in the league phase.

CSK, on the other hand, have looked completely off-colour this season and the defeat at the Sheikh Zayed Stadium has pushed them to the bottom of the points table. CSK will now have to win all their remaining four matches retain chances to qualify for the playoffs.

Earlier, CSK won the toss and batted in a match that was captain Mahendra Singh Dhoni’s 200th in the IPL; he thus became the first player to play 200 IPL matches.

Ravindra Jadeja top scored with 35 not out (off 30 balls) while Dhoni made 28 off 28 before being run out due to his own fault.

Jadeja and Dhoni added 53 runs in 7.4 overs as they struggled to get going. The two had joined hands at the fall of Ambati Rayudu’s wicket. CSK were struggling at 56/4 in 10 overs at the time.

18
Previous The Woman I Want to Be
Next Rs 187 bn Required To Rollout 5G in Mumbai, Delhi: Report