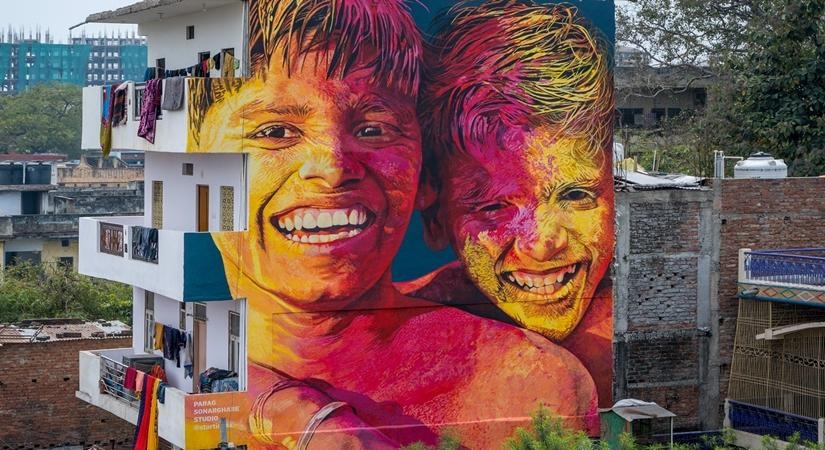 Painting stories of local communities of cities of Uttar Pradesh on a ‘donated wall’, a new art initiative is bringing together public art, talented artists and socio-cultural ethos to reimagine and reinvent public spaces in a unique way…writes Siddhi Jain

The ‘Donate a Wall’ initiative by Asian Paints and St+art Foundation asks city dwellers to donate a wall in their community which would be painted and beautified by Asian Paints at no cost. The wall should have a story to tell and the story would lend itself to a masterpiece of artwork.

In Varanasi, a city situated on the banks of the holy river Ganga, the project aimed to celebrate the complexity of the city in one striking and symbolic image. A beautiful photograph of smiling faces brought to life by the truly talented artist Parag Sonarghare reminds one of the simple joys of life. The artwork that began on the brink of Holi this year was completed just before the country went under lockdown and unveiled in August, and now, as we slowly get back on our feet, it lifts spirits as people ‘unlock’ and step out.

According to the Vadodara-based artist Parag Sonarghare, who painted the mural, Varanasi is made up of many layers. He says: “As I walk on the Ghats, I feel like this is where I am supposed to be. Holi is the kind of festival that brings everyone together. Holi invokes a sense of celebration in people. Holi is synonymous with a colour which has its own language. A language that everyone knows and understands and my aim with this artwork were to connect people with this language of colour.”

The #DonateAWall project took on newer dimensions in Lucknow and aimed to centralize the importance of farmers, the unsung heroes who have been the spine of the country in the wake of urbanization. Through depicting the most common visual seen on Indian streets, that of a boy chewing cut sugarcane, this piece by artist Amitabh Kumar, reflects on the state’s contribution in setting up one of the primary mills that led India to become renowned for its sugarcane production.

This artwork, too, was completed right before the country went into lockdown. It is a simple attempt to highlight our relationship with natural products as consumers, evoking our traditional ways of eating in homage to our roots.

Delhi-based artist Amitabh Kumar, who painted the Lucknow mural, shares: “In my grandmother’s house in Aliganj, there used to be people who came with cut sugarcane; and I remember peeling the sugarcane with my teeth. That sensation of peeling sugarcane is still very fresh in my memory and that is what I have tried to capture in this piece. With this artwork, we wanted to highlight the relationship between the consumer and farm-based produce. It is about the relationship we share with food.”

After spreading smiles in Varanasi and paying tribute to farmers in Lucknow, the art initiative will now move to Kanpur to unveil another mural next week. The city’s ‘Nature and Us’ artwork reflects on the environment and its current issues while highlighting the role we can play to solve them. The constructive visual imagery aims to stimulate in an educative yet witty way the youth of the school and the wider audience of the passerby by depicting local animals and plants coming along as a puzzle that we must rebuild together.