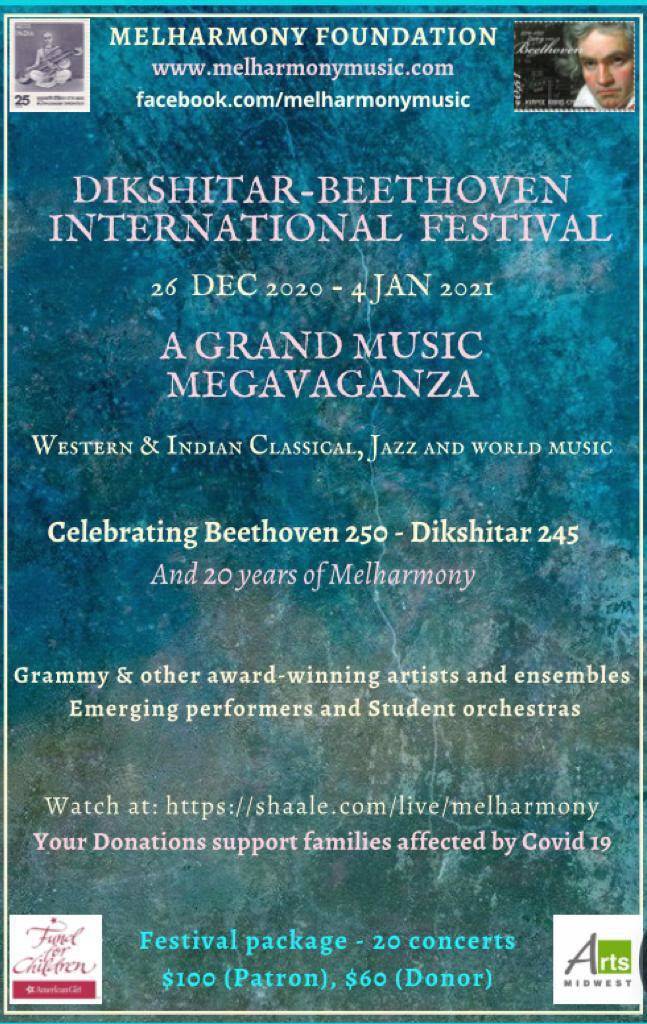 Creatively supporting victims of the pandemic

The Melharmony Foundation established by the Chitravina maestro Ravikiran is celebrating its 20th birthday with a grand online ‘Melharmony Festival’ from 26 December 2020 to 4 January 2021. The proceeds of this concert will be donated to artists severely impacted by COVID 19.

Ravikiran, a prodigy and a Chitravina artist par excellence is only one of a handful of people in the world who can play this 21 stringed Indian lute, one of the most ancient types of lute.

Being inspired by ‘Global Echoes’ his musical collaboration with members of the BBC Philharmonc for the Bradford based Kala Sangam, Ravikiran created the concept of ‘Melharmony’.

Melharmony takes into consideration the rules and aesthetics of melody-centric systems like Indian classical as well as harmony-anchored systems like Western classical and jazz but is not limited to only those genres. Ravikiran further enriched Melharmony by working with Prof. Robert Morris, the noted western music composer and theorist, Eastman School of Music, New York.

Inspired by the immortal compositions of the great traditional Indian and western composers, Ravikiran created a new music festival – the ‘Melharmony Festival’ to feature the compositions of two master composers who were contemporaries of the same era but from the diverse worlds of melody and harmony.

The previous Melharmony Festivals of Venkata Kavi – Bach or Tyagaraja – Mozart held in various cities in Germany, Switzerland, UK and USA attracted a wide audience, so much so, that the cities of Middleton and Madison even dedicated one day in the year as a Melharmony Day!

This year, the festival celebrates the immortal compositions of the legendary composers ‘Dikshithar and Beethovan which will be performed by Ravikiran, Grammy award winning artists, ensembles, emerging performers and student orchestras of Western, Indian classical, Jazz and world music. Ravikiran has also created a new Indian raga (mode) named Veetavanam, in honour of Beethoven.

The pièce de résistance of this festival will be performed on 27th December 2020 where the 4-time Grammy Awardee Glen Velez, Rhythm Vocalist Loire Cotler, K.V.Prasad, Apollo Chamber Players and Ed Matthews collaborate in two compositions of Dikshitar – Shree Kantimateem and Parvati patim – arranged by Ravikiran, who will also perform sections of Beethoven’s Op 18, Parts I and IV with the Houston based Apollo Chamber Players.

Other major artists in the festival include artists from south India, namely, Sikkil Gurucharan, R Suryaparakash, Mylai Karthikeyan on Nadaswaram (a double-reed woodwind),  Akkarai Sisters, Vittal Rangan, and percussionists Neyveli Narayanan and K V Prasad.  The festival will also feature emerging performers from USA, India and Europe performing with or accompanying these celebrities.

Asian Lite wishes the Dikshithar – Beethovan Melharmony Festival great success and the generous support for this good cause for artists affected by the pandemic is gratefully acknowledged.

For further information on the festival, please see below: