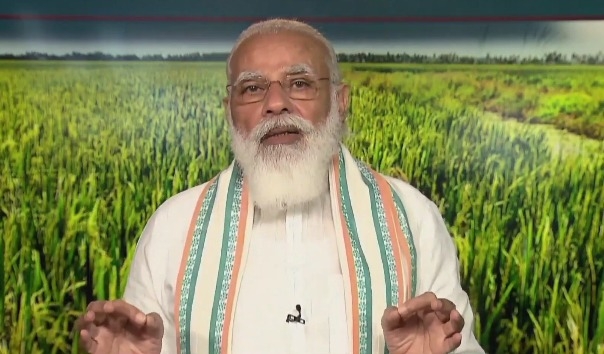 The Prime Minister said that the government’s aim is to make each citizen prosper and make India ‘Aatmanirbhar’ (self-reliant).

Hitting out at opposition parties without taking names, the Prime Minister said that some people have been spreading rumours against these laws against which thousands of farmers mainly from Punjab and Haryana have been sitting on indefinite protest on various Delhi borders.

Addressing people through video conferencing after laying foundation stone and inaugurating projects at Maharaja Suheldev Memorial in Uttar Pradesh’s Bahraich, the Prime Minister said that a false narrative is being spread among people against these laws for political benefits.

“The new agriculture reforms will benefit small and marginal farmers the most. Some people are propagating rumours against these reforms,” the Prime Minister said.

In an obvious attack on the Congress, Modi said “those who used to invite foreign firms in India are now protesting against the government which is trying to give opportunity to the Indian private companies”.

He said that the farmers themselves have unmasked those politicians who have been spreading rumours against these laws since they were enacted in the Monsoon Session of Parliament in September last year.

The Prime Minister further mentioned how purchase of paddy by the government has doubled in Uttar Pradesh compared to previous year in spite of the Covid-19 pandemic. This year paddy purchase is registered at 65 lakh metric tonnes so far this season.

Similarly, the Prime Minister said, ‘Svamitva Scheme’ is also being run across the country to protect the lands of farmers. “Drone survey has been conducted in over 12,000 villages and over two lakh families have received property cards so far. The farmers are for the first time witnessing a scheme playing a role like armour to protect their lands.”

Svamitva scheme, which was launched by the Prime Minister on National Panchayat Day on April 24, 2020, aims to provide an integrated property validation solution for rural India and the demarcation of rural population areas is being done using drone surveying technology. This would provide the ‘record of rights’ to village household owners possessing houses in inhabited rural areas in villages which, in turn, would enable them to use their property as a financial asset for taking loans and other financial benefits from banks.

The Prime Minister further said that Maharaja Suheldev Memorial will inspire generations to come and boost tourism in Uttar Pradesh where maximum tourists visit. He also mentioned how Uttar Pradesh is among the top three states in the country where maximum foreign tourists come visiting.